At the National Council meeting in Sydney on June 20th 2015 the first of the changes recommended by the Youth Program Review were approved and these minimal changes will now be included in National Policy and Rules and all documentation. Please note that these changes are adopted within the Queensland Branch. One of the Youth Program Review teams focused on the Fundamentals of Scouting, the Aim, Mission and Principles of the movement.

The changes adopted are in line with the World Organisation of the Scout Movement (WOSM) statements as they were determined to be relevant to contemporary society, and can be applied to an Australian context without adjustment. The new statements are as follows:

The Mission of Scouting is to contribute to the education of young people, through a value system based on the Scout Promise and Law, to help build a better world where people are self-fulfilled as individuals and play a constructive role in society.

The purpose of the Scout Movement is to contribute to the education of young people in achieving their full physical, intellectual, emotional, social and spiritual potentials as individuals, as responsible citizens and as members of their local, national and international communities.

The consultation process regarding proposals for the below will commence during August:

Every member will have the opportunity to respond through the Region consultation process by December 2015 which is currently being developed with the Deputy Chief Commissioner and Branch Commissioner teams. This will be advised through the Branch team and the Region Commissioner once finalised and all members should endeavour to attend so that they may participate in the consultation process. Feedback from members in this Branch is extremely important so that this may be passed directly to the National Youth Program Review team.

Following a number of unfortunate incidents posted on personal Facebook pages recently we have developed a new QBSI – Social Media Policy which will be released during July. Once released this policy will apply to all members (youth and adults) of Scouts Queensland.

WHAT IS A SCOUTS’ OWN?

Many Leaders struggle to understand the importance of a Scouts’ Own and one simple method of our Duty to God.

Scouts’ Owns were introduced at the Crystal Palace Rally in 1909. They were originally meant to be simple, interdenominational religious celebrations. Often consisting of songs, prayer and a yarn, the Scouts’ Own encouraged quiet times of reflection and were used at camp and in Scout meetings. Although invented by ‘Uncle’ H. Geoffrey Elwes, these ceremonies increasingly mirrored Baden-Powell’s ideas about individual development and expression. Scout lore was blended with religious stories and ideas in writing and in practice. Emphasis was on good deeds and upright character.

As Baden-Powell wrote:
‘You will find that heaven is not a kind of happiness somewhere up in the skies after you are dead, but right here and now in this world.’

The following activity may be useful to the Troop or Pack to consider.

SMARTIES – WE ARE ALL ALIKE

Props – a packet of Smarties, small bowl of water, sieve.

Start by explaining your feelings about racism, how it affects other people, and how it should be avoided at all costs, colour especially.

Take a handful of Smarties and show them around, ask some Scouts which is their favourite colour. Throw the Smarties into the water and swill them around until all the colour fades away. Pour them into the sieve and show to the Scouts.

Moral: Everyone has their favourite colour but if you wash the colour off, we are all the same deep down. 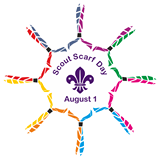 Hopefully everyone will wear their scarf for the full day and send photos into the Scouts Queensland Facebook page (https://www.facebook.com/scoutsqld).