Que planned to sit down quietly in a corner of the Charles S Snow Centre for the Wood Badge Centenary Dinner, after a brief visit to Skill-o-Rama, Redcliffe, where she had met a visiting New Zealand Scout leader.  However that was not how things were meant to be.  Before she knew it, the main hall was a buzz with activity as tables and chairs were dragged out for a formal dinner, laid out with candles, table cloths, cutlery and sound systems.  Everything had to be done in a precise manner.  In the next room, old Wood Badge course logbooks were being laid out, and in the kitchen, the Chef was busily roasting all sorts of meat and vegetables.  In the courtyard, the Heritage Team were busily setting up a display and slide show of leader training in Queensland.

Before Que knew it, it was 4.30 pm and the first guests began to arrive.  Que mingled with them taking photos and getting her logbook signed.  There were all sorts of people from branch HQ, a wide range of regions (i.e., Wide Bay & Burnett, Northern Moreton, Brisbane North, Brisbane South, Moreton and South Eastern), and 1 international guest from the Philippines.  At 5.30 pm, everyone was summoned down to the edge of the parade ground to witness Daryl Scott, Chief Commissioner (Qld Branch), planting two commemorative trees, of which one was from Gilwell Park, Gembrook Victoria.  The ceremony was graced by a wise Koala who watched with interest from a nearby tree.  Que scampered up the tree to make acquaintances.  This was followed by an activity which involved participants forming patrols to answer 33 scouting trivia questions.

At 6 pm, dinner was announced, and everyone took their seats.  The dinner consisted of mixed fruit punch and two courses, which was quite filling.  After dinner, there was an address by Bryan Brown, Branch Commissioner (Adult Training and Development), followed by the lighting of the “Lamp of Knowledge” and a short speech by the Daryl Scott, Chief Commissioner (Qld Branch).

Que found out that the lamp of knowledge was an ancient Egyptian Symbol which featured the eternal flame of knowledge.  It symbolises higher education and is inspired by the story of Diogenes (dy-OJ-ineez) , an ancient Greek philosopher. It is reported that Diogenes carried a lantern at noon each day in search of an “honest man.” The honest man represents both truth and knowledge.  Through Wood Badge courses, the Training Team endeavours to pass the “knowledge” of scouting to adult leaders.  Many National scouting fleur-de-lys emblems feature a North point, representing uprightness and upholding the truth.  The lighting the flame of the lamp, encourages all leaders in scouting to remember that we need to continue to enlighten ourselves as knowledge on scouting and our society evolves.

The Murrumba District Chaplain, Gary McDonald, then gave a sermon, and this was followed by two songs “In my Dreams I’m going back to Gilwell” and the “Scout Hymn” which were both written by Ralph Reader, and led by Pat Dryden from the Heritage team.  Que noted that it was helpful to have an on-screen karaoke version accompanying for those unfamiliar with the tune.

Cliff Farmer, former National Commissioner (Adult Training & Development, 1980-1986) gave a speech on reflections of leader-training.  His presentation ended just as various people were connecting-in via zoom to convey their greetings.  Amongst these were Peter Blatch, World Scout Committee Member, World Organisation of the Scout Movement, calling in from Brunei, and Dougal Mayor, National Commissioner (Adult Training & Development), Gold Coast Region and Kennedy Region.  There was also a chance to see and talk to other sites across Queensland, and as usual there were some technical problems, where Que could see some sites, but not hear them, and vice versa.  She did manage to wave paws to Matilda Koala down in the Gold Coast.  The internet link-up was followed by the presentation of the Wood Badge to David McKitrick, Asst Scout Leader, Gumdale Scout Group.  The evening ended with a closing remark by Kirsty Brown, Immediate Past Chief Commissioner, a group photo and announcement of the winning patrol of the Scout Trivia Quiz.

When Que reflected back on the evening’s event, she remembered the things that sent a warm glow through her were the fellowship of many leaders celebrating an ongoing tradition, and the auspicious visit of the Koala.  As Que climbed the Koala’s tree, and the Koala gazed down on the leaders, she imagined the Koala perhaps saying “If you scout leaders continue to inspire, educate, and look after my home, I will continue to keep watch over and bless you!”. 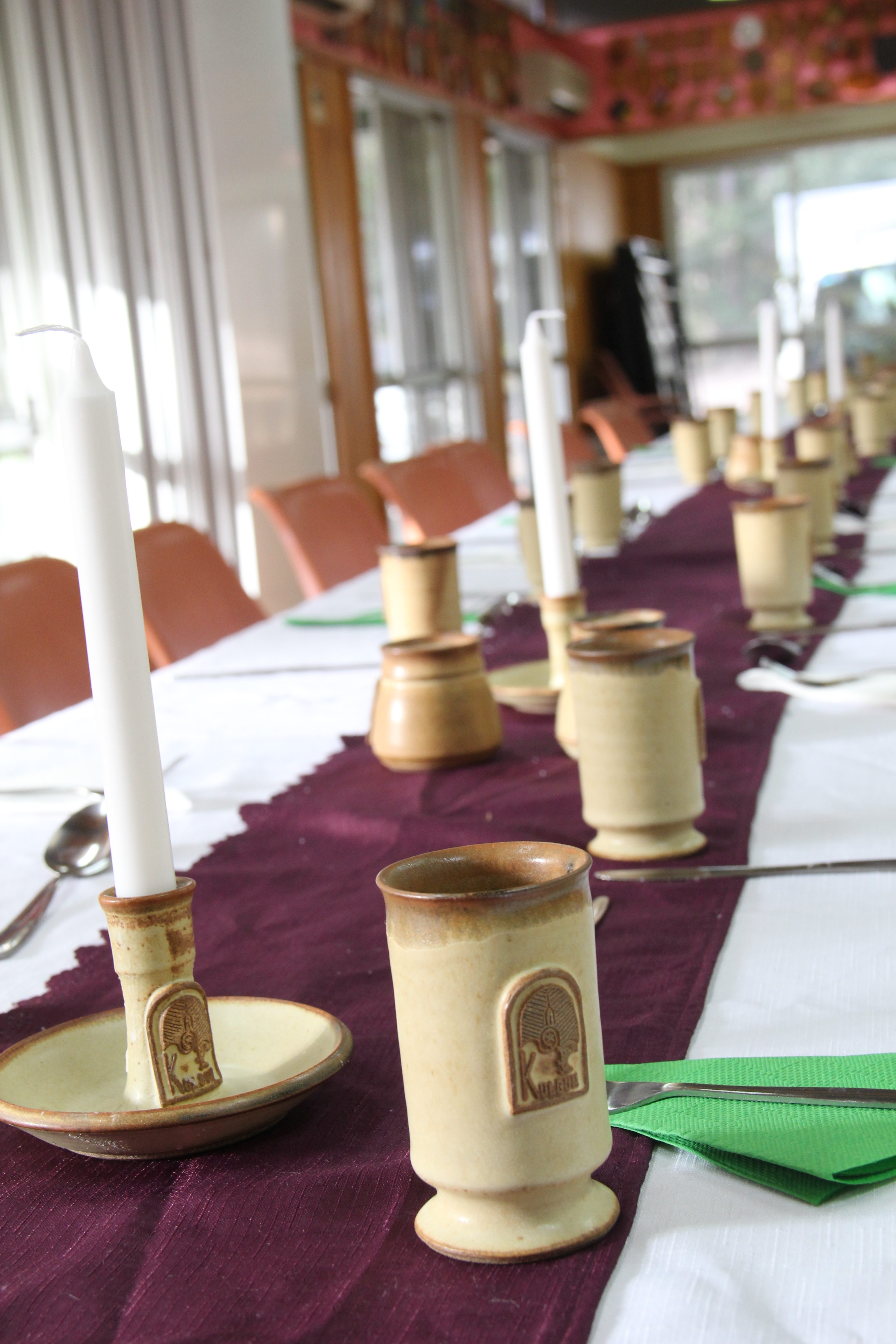 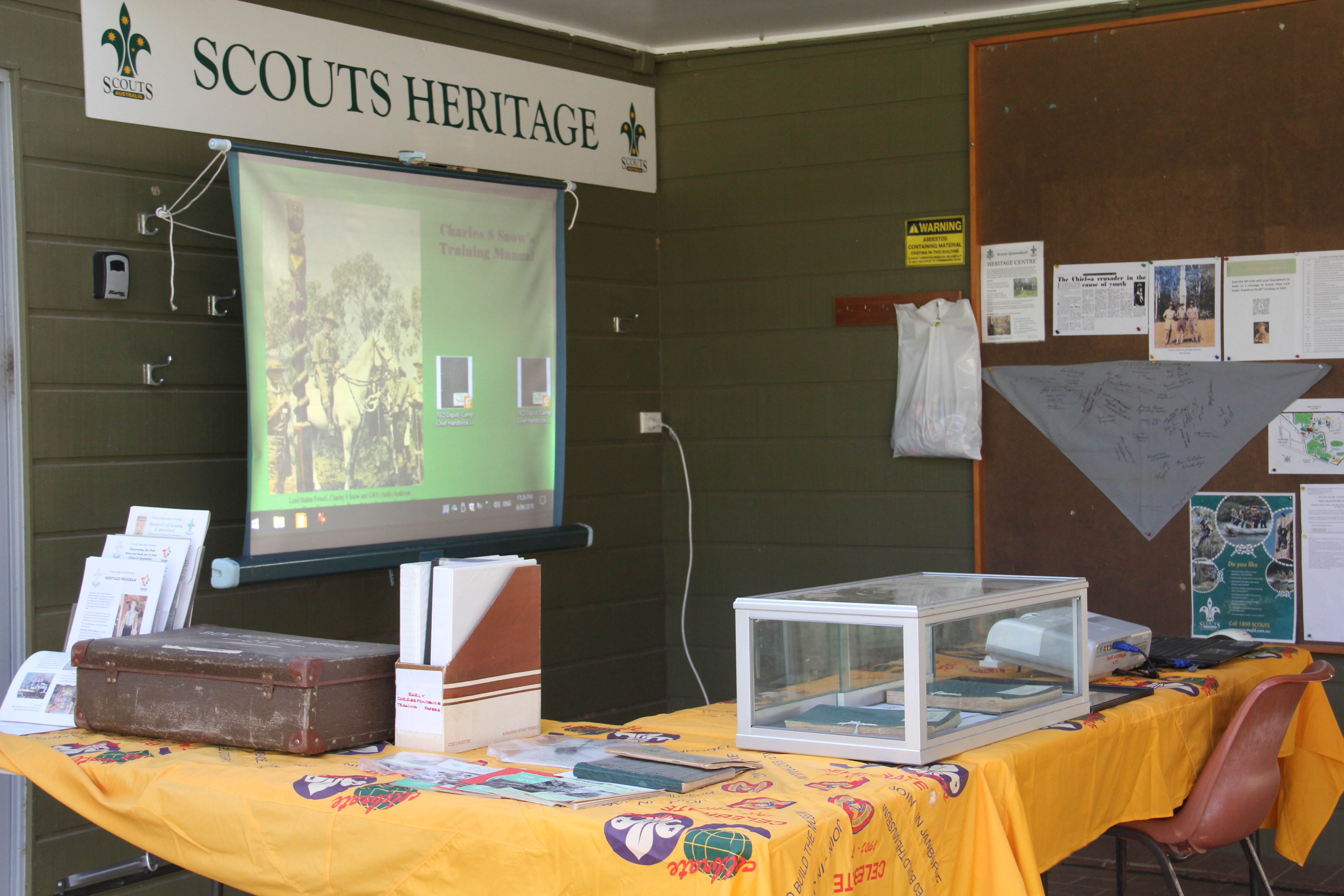 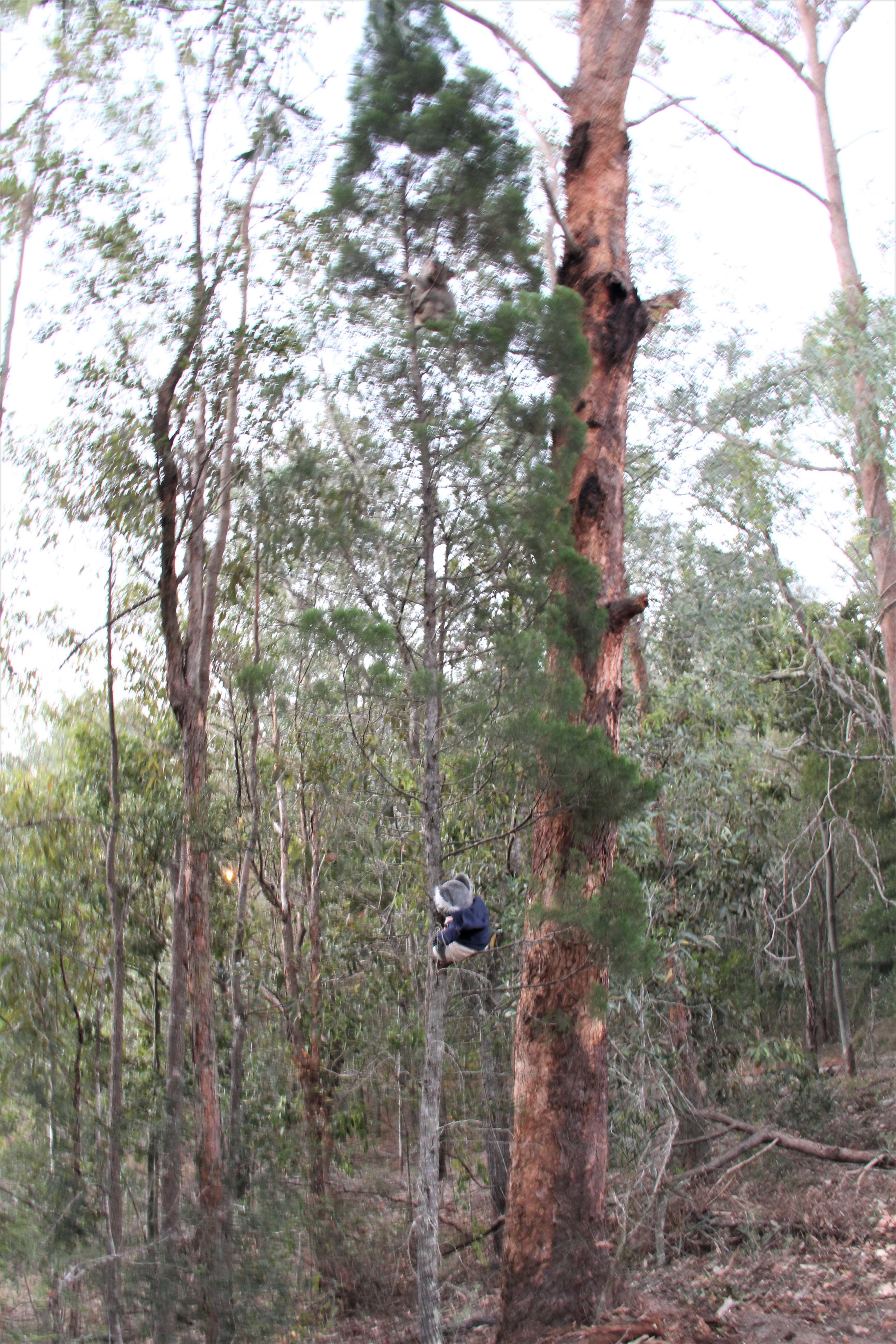 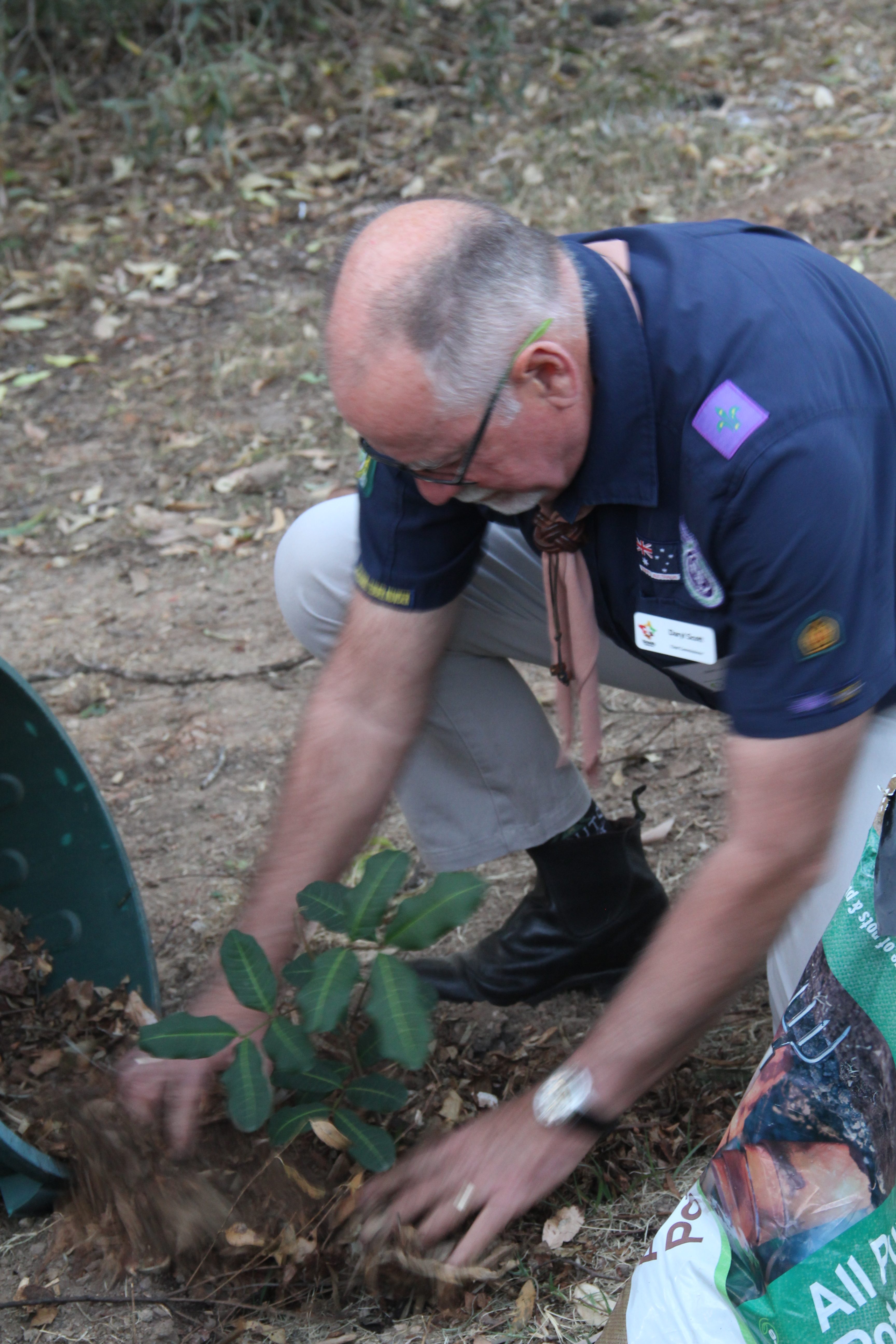 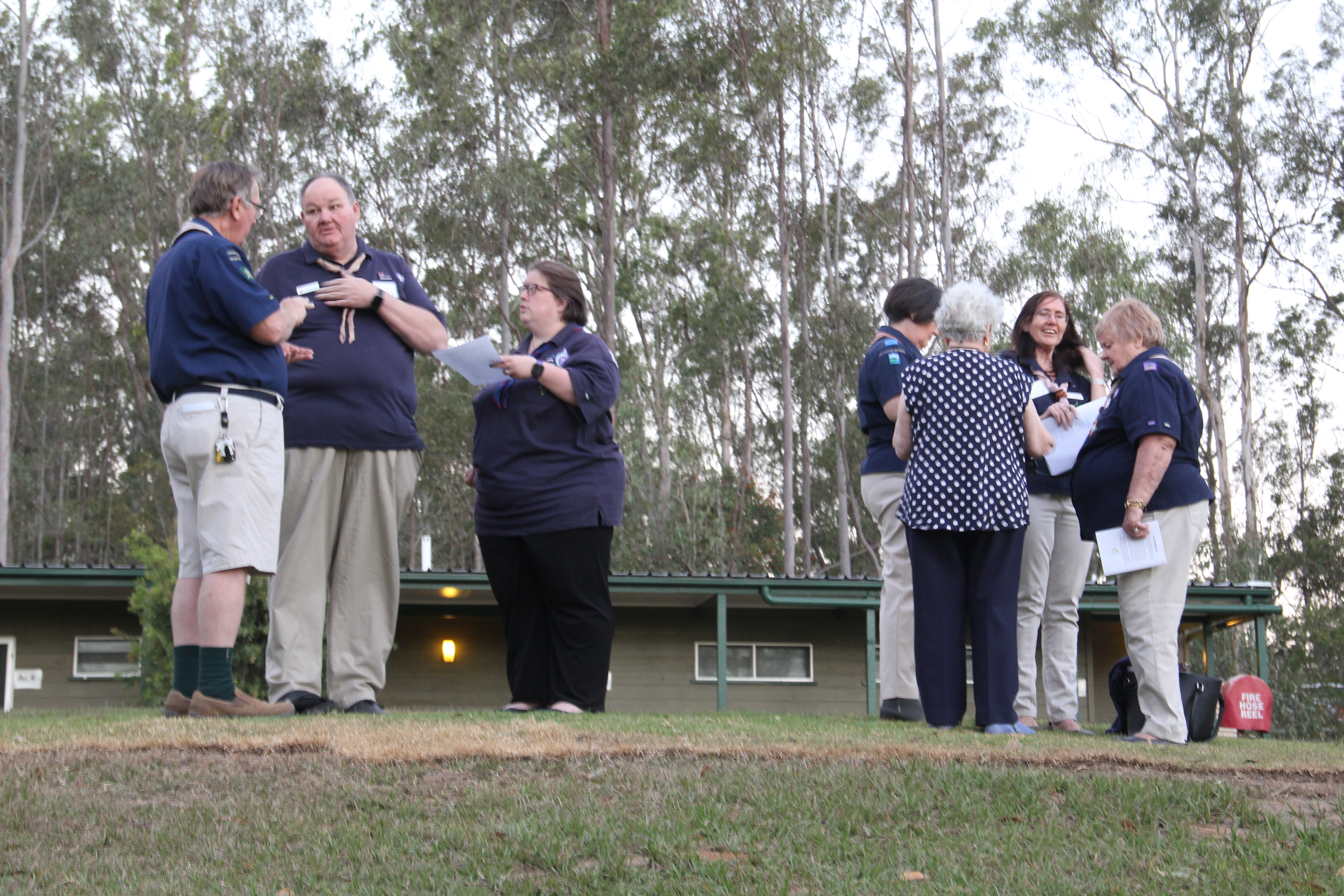 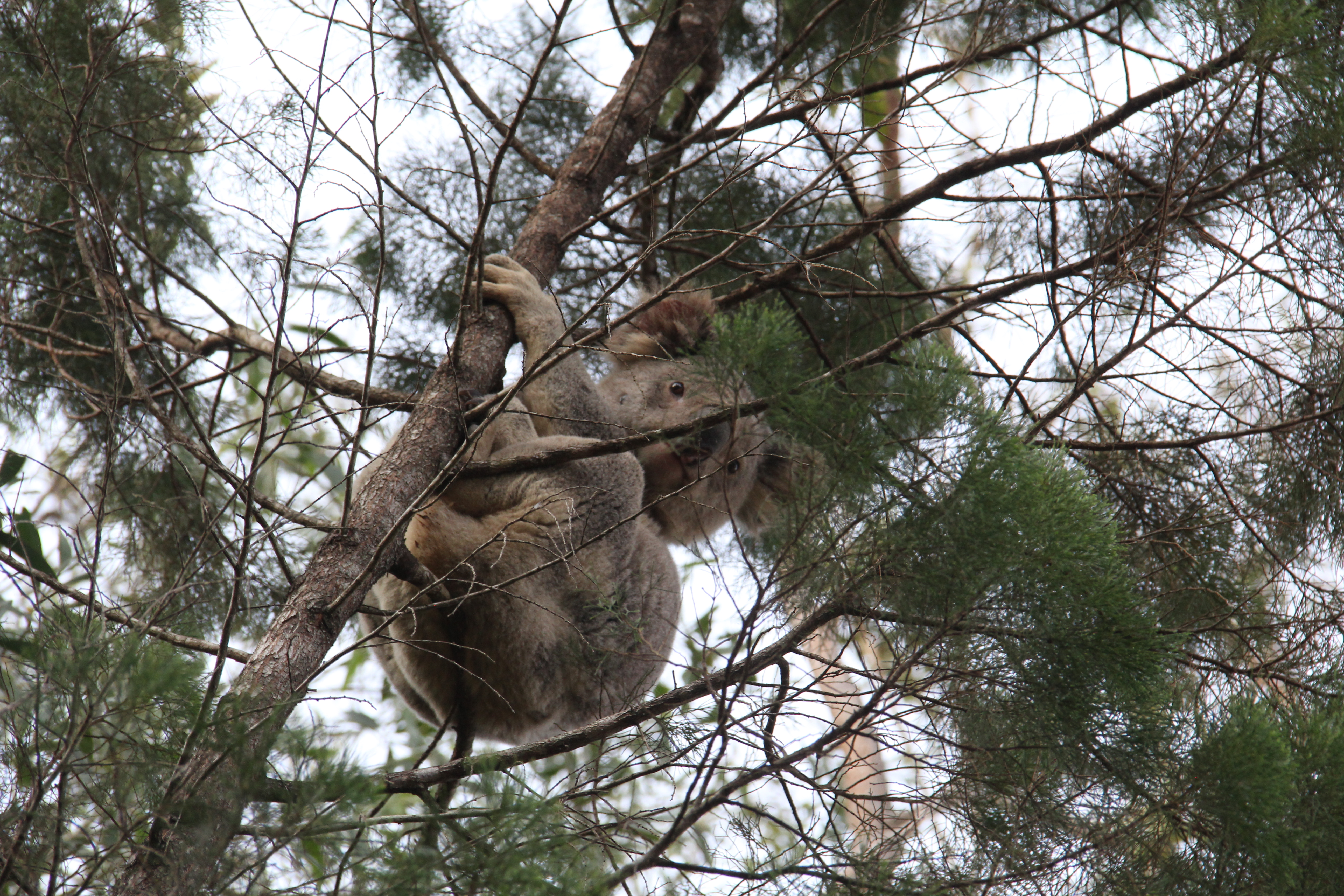 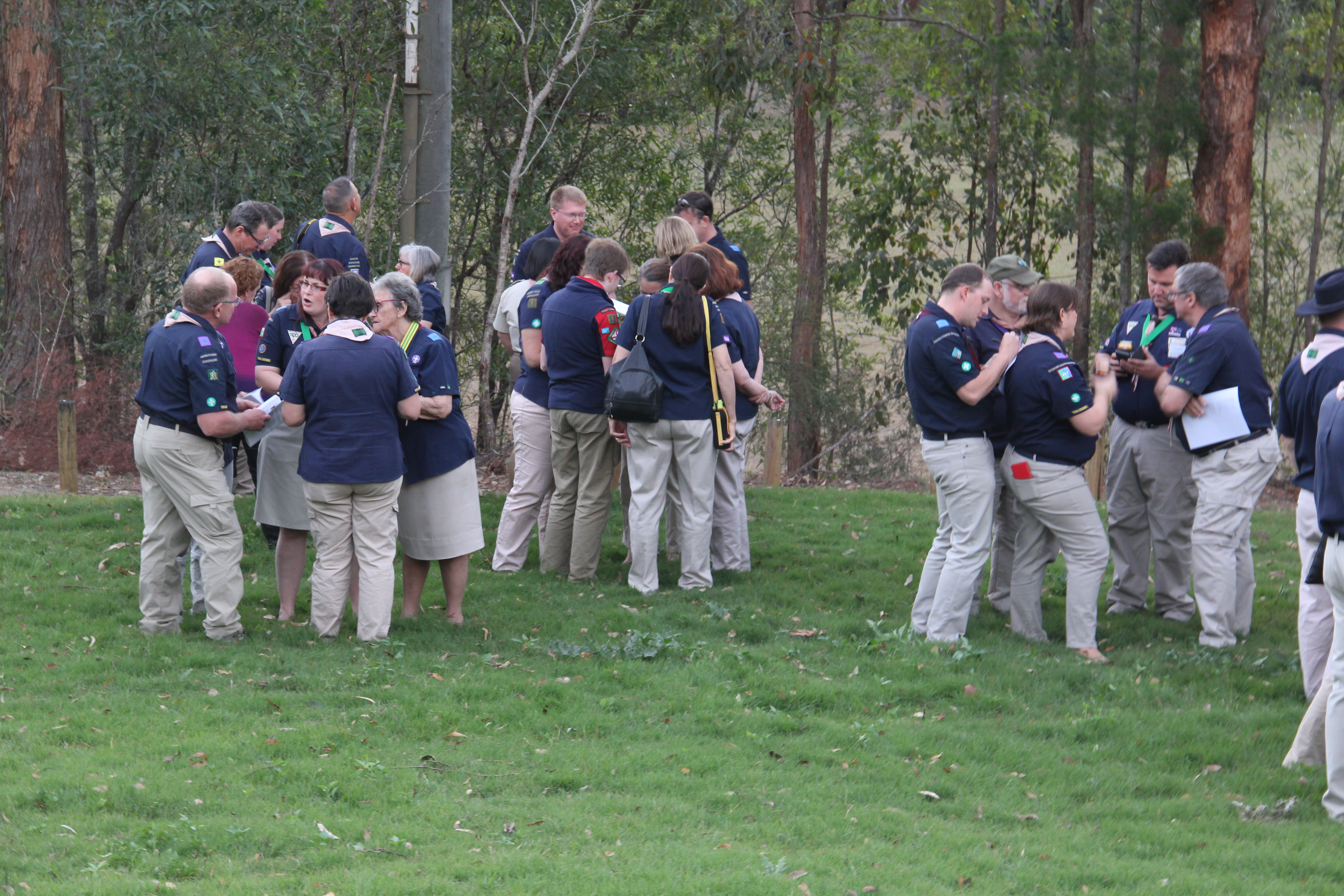 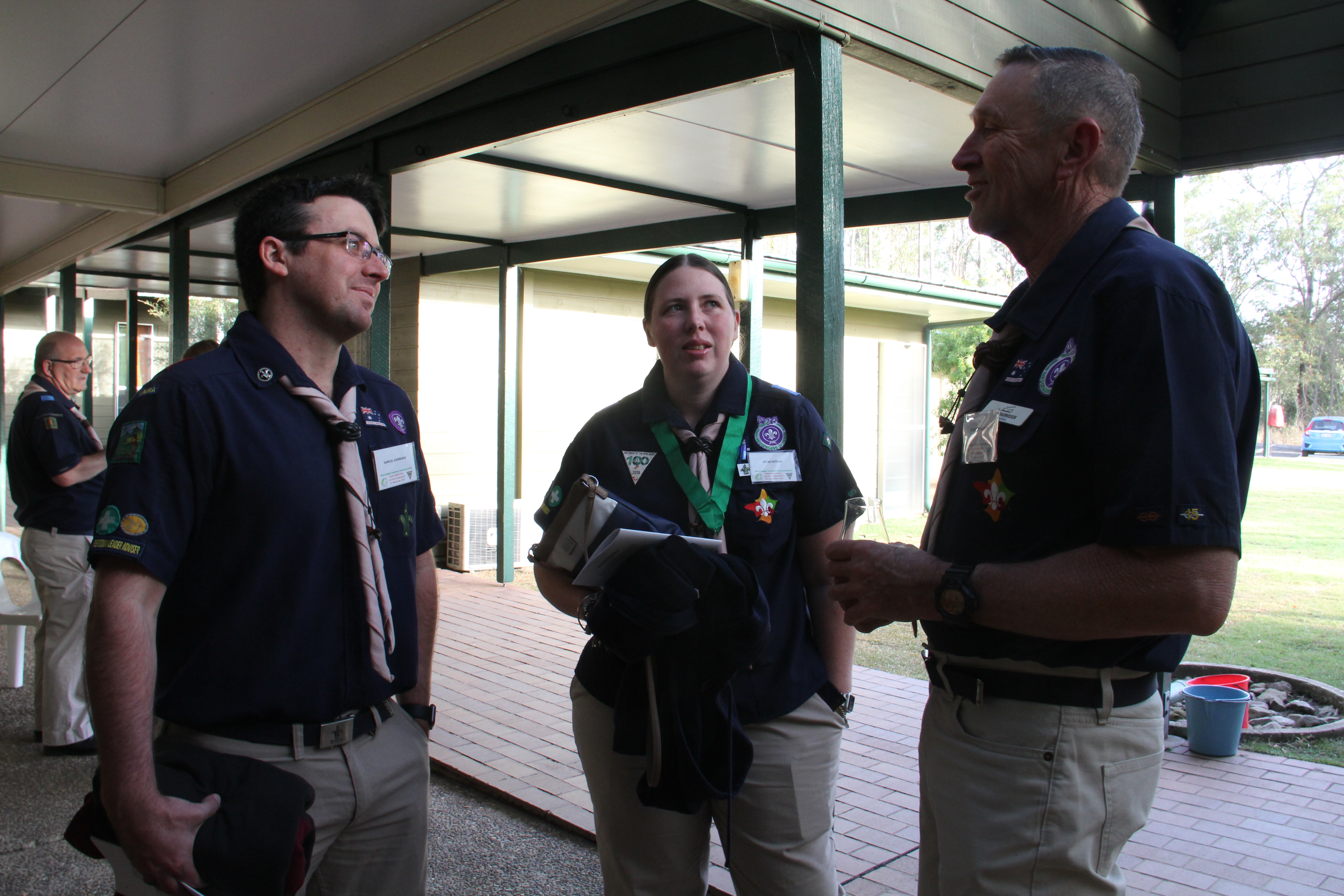 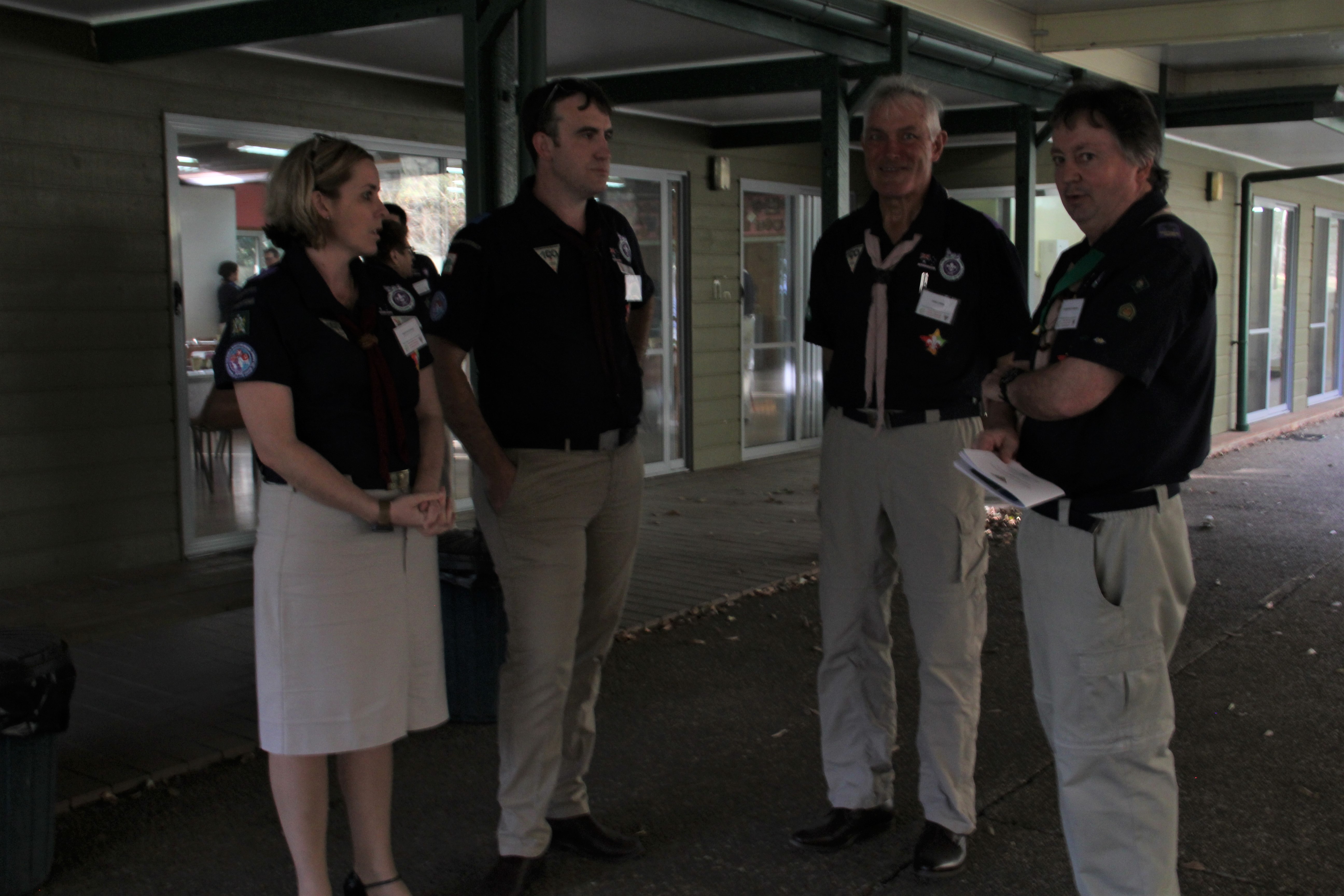 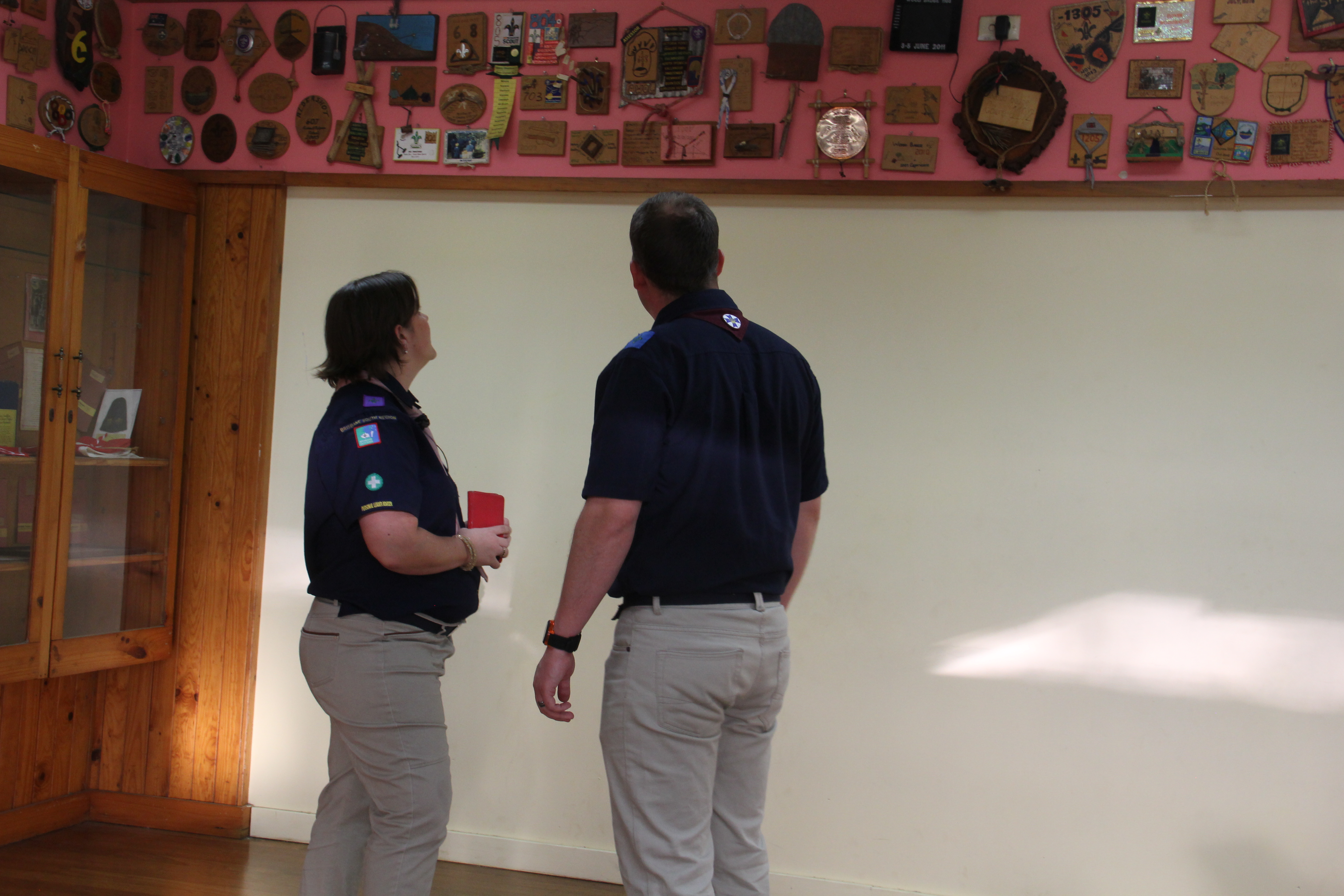 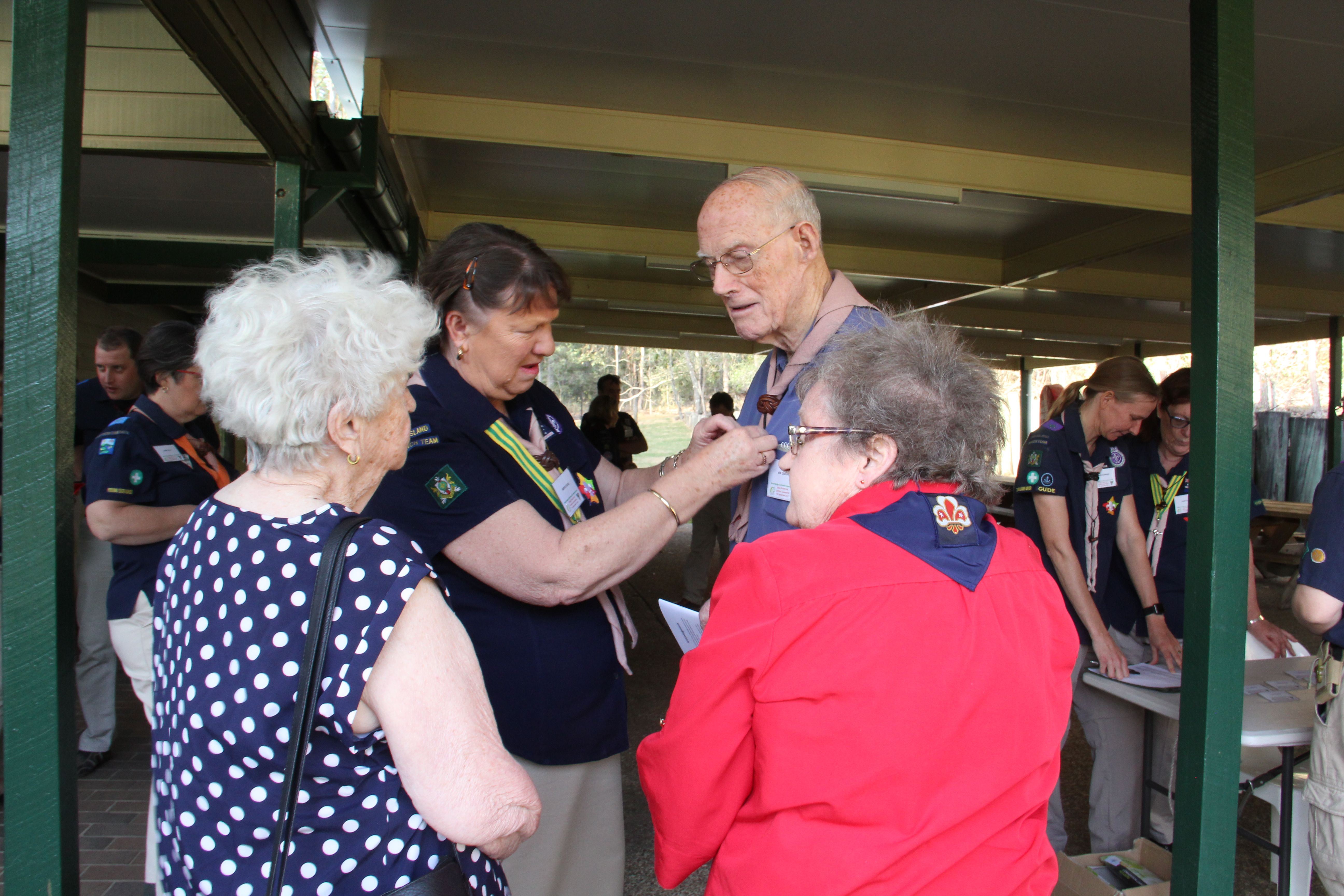 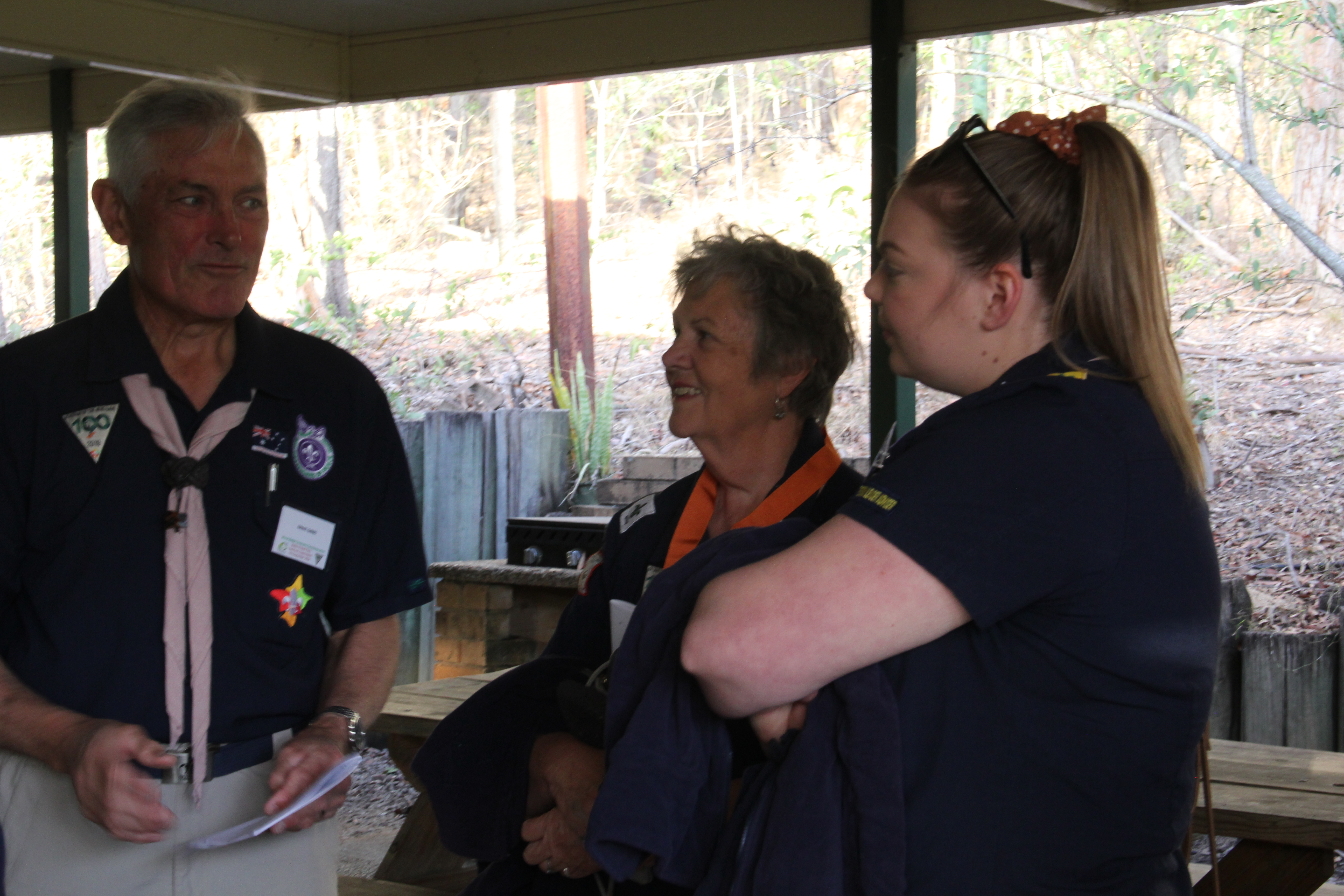 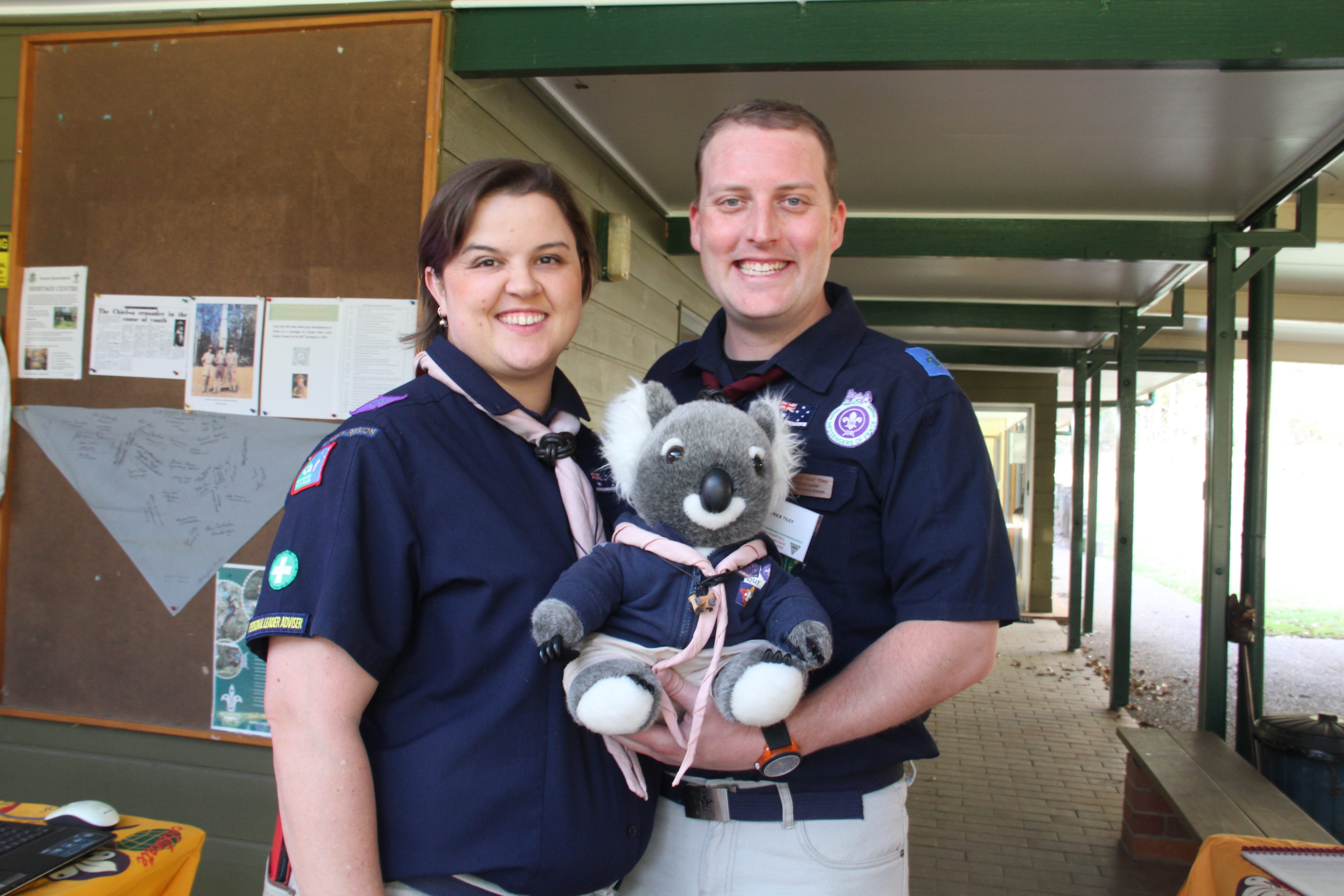 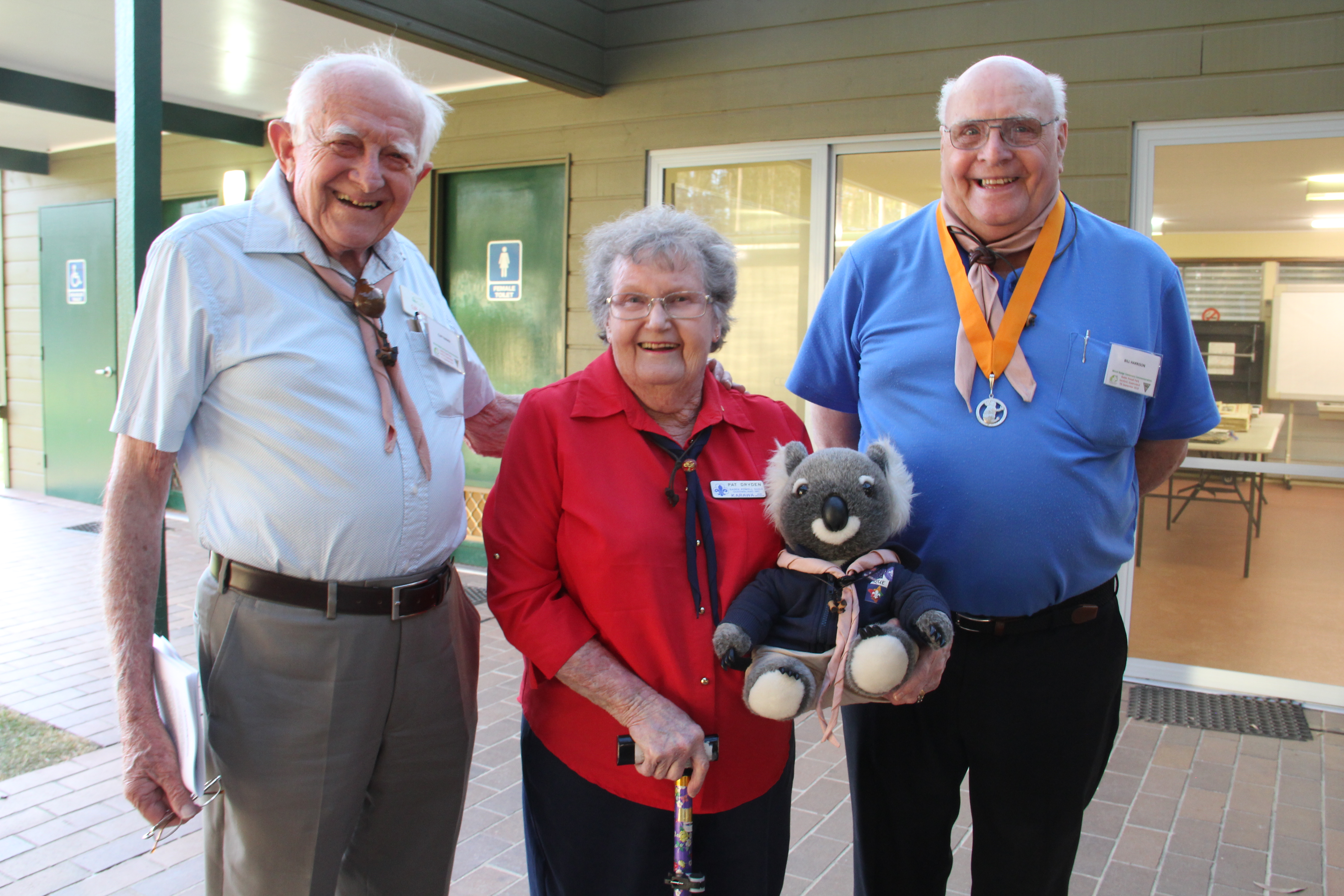 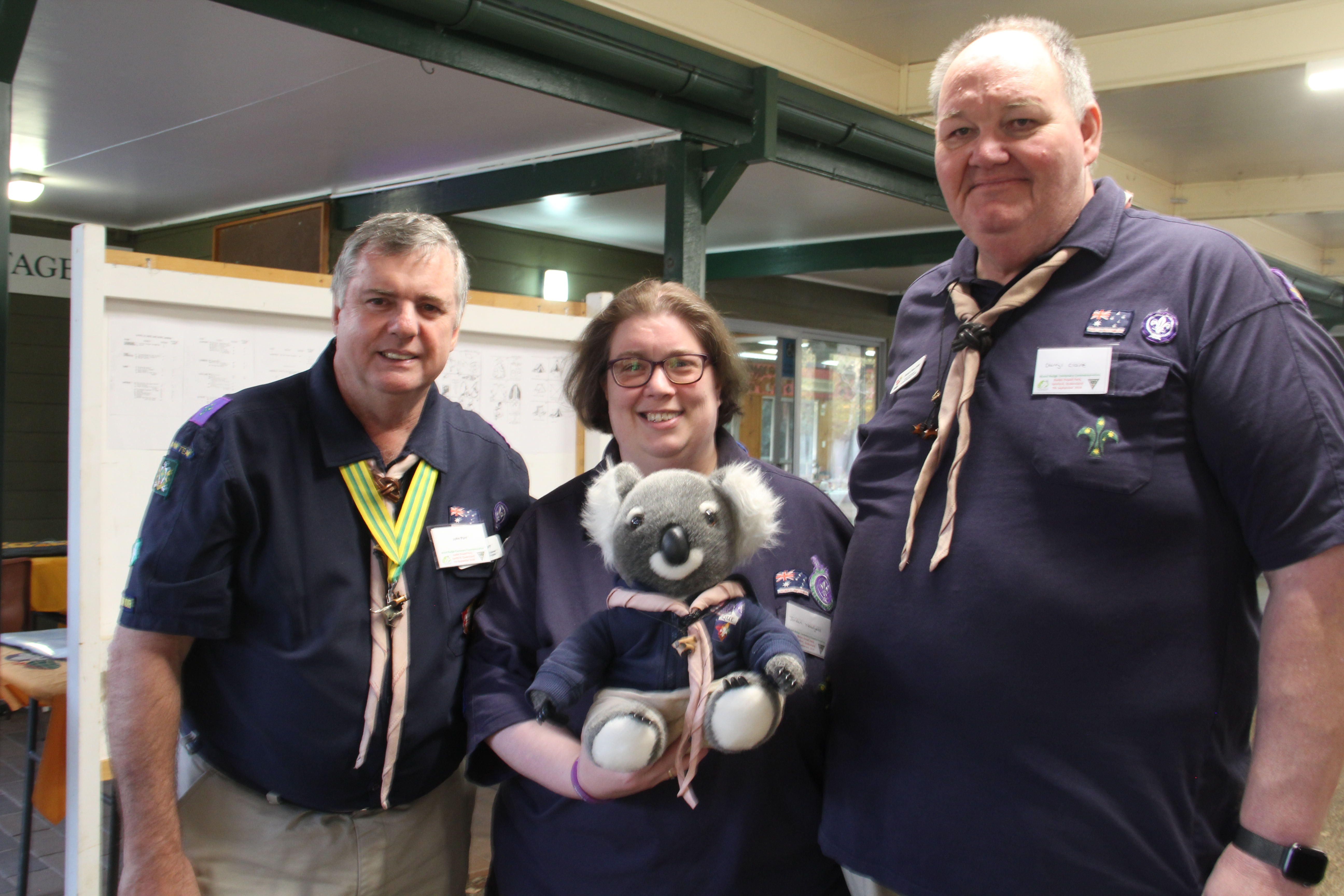 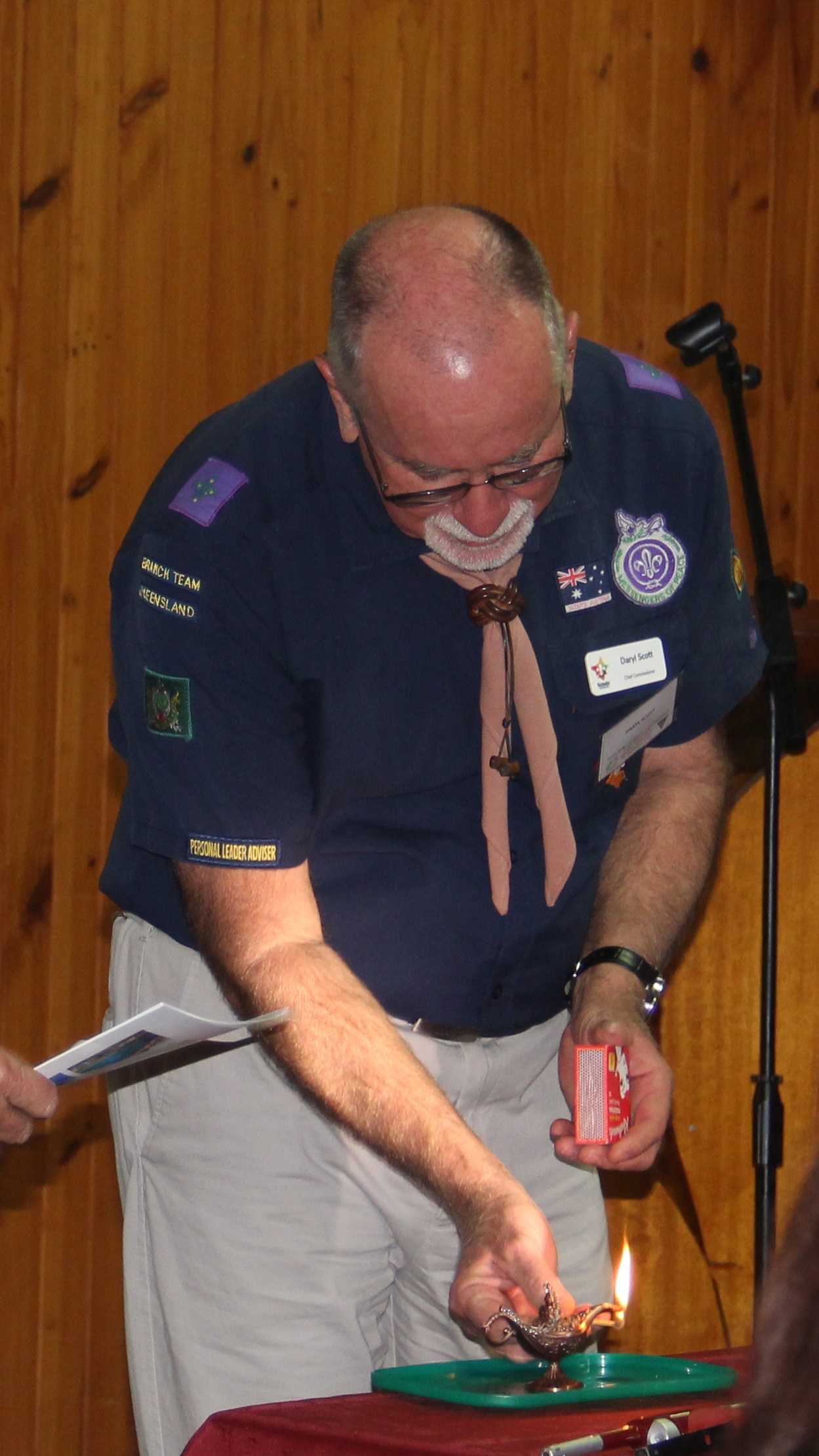 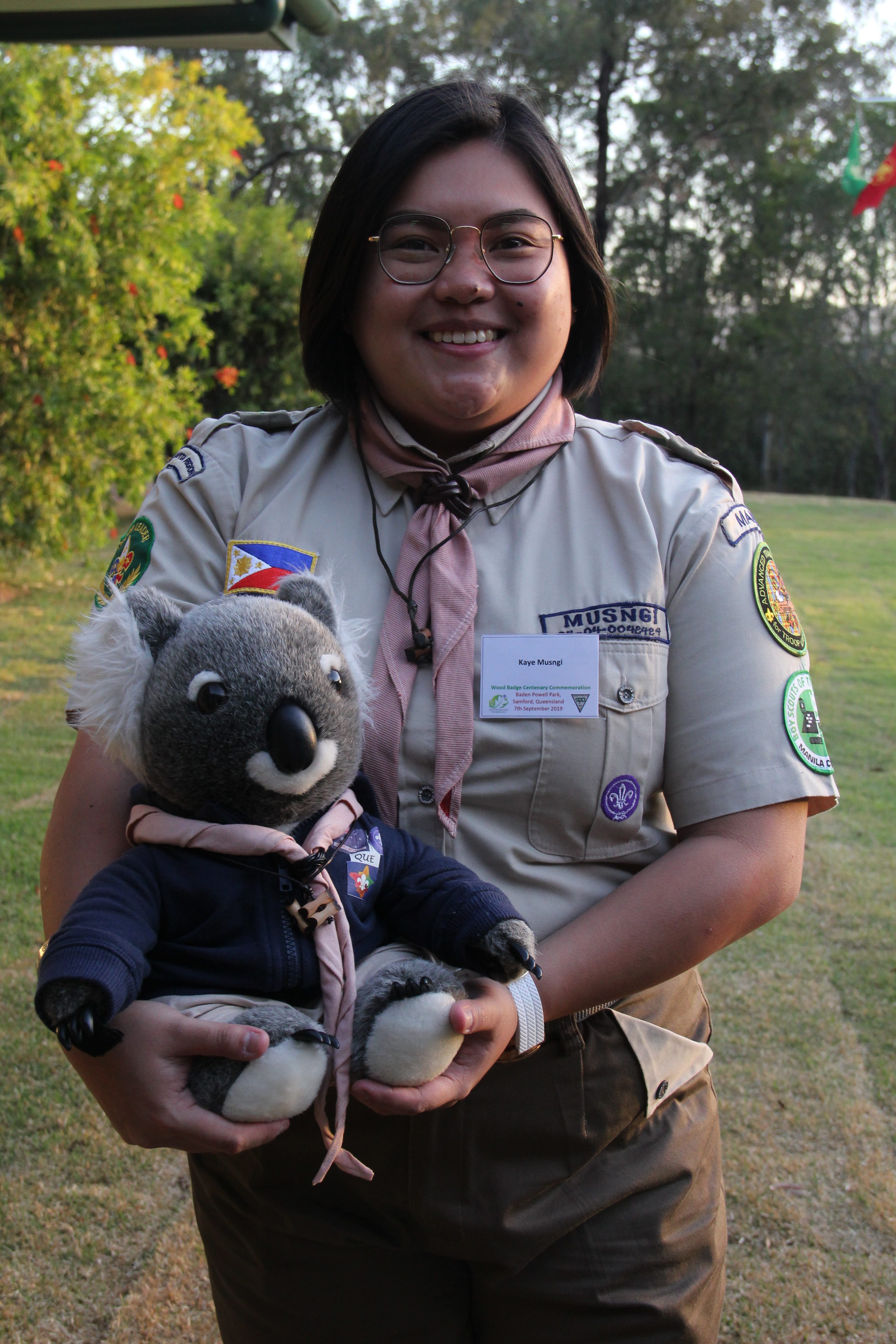 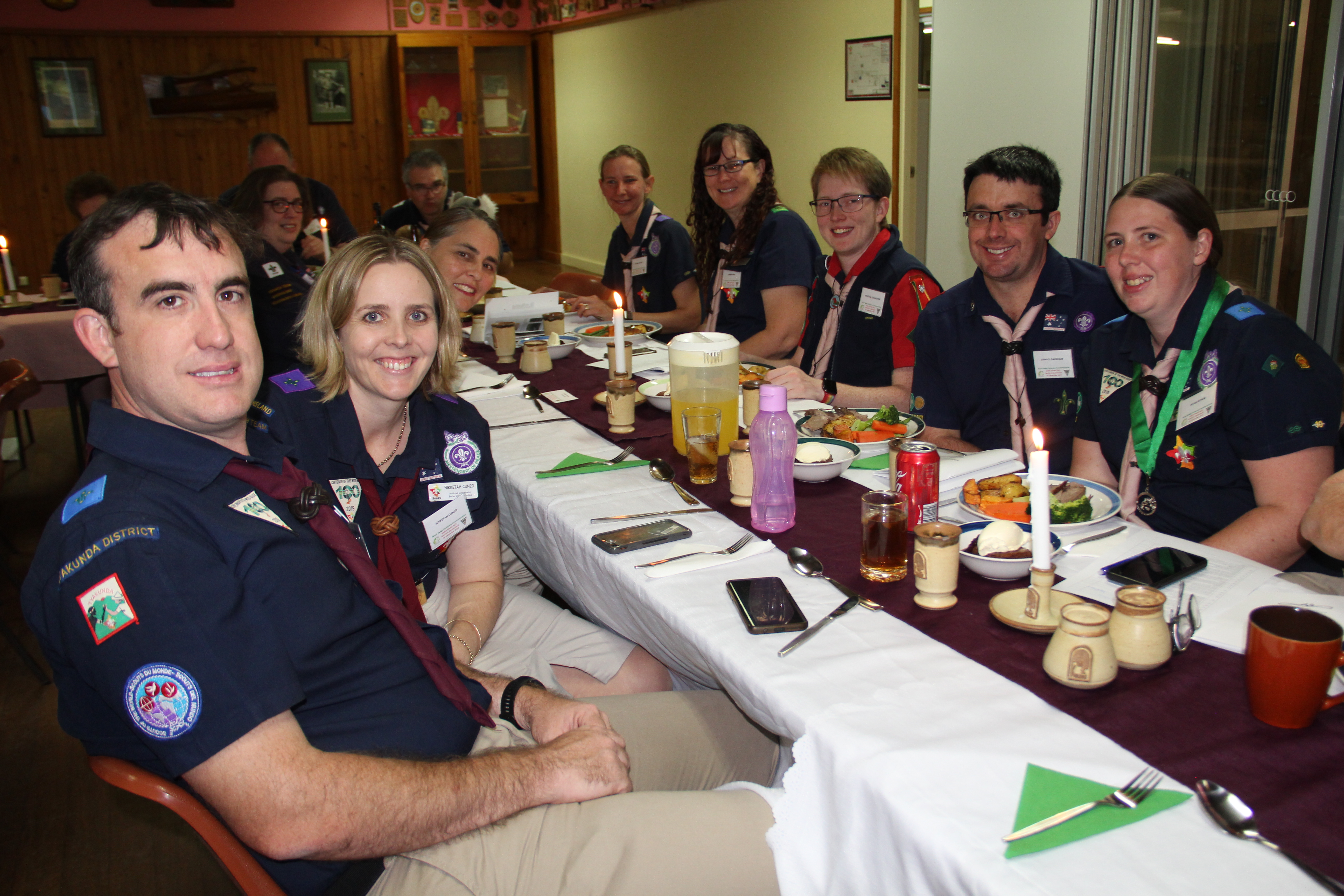 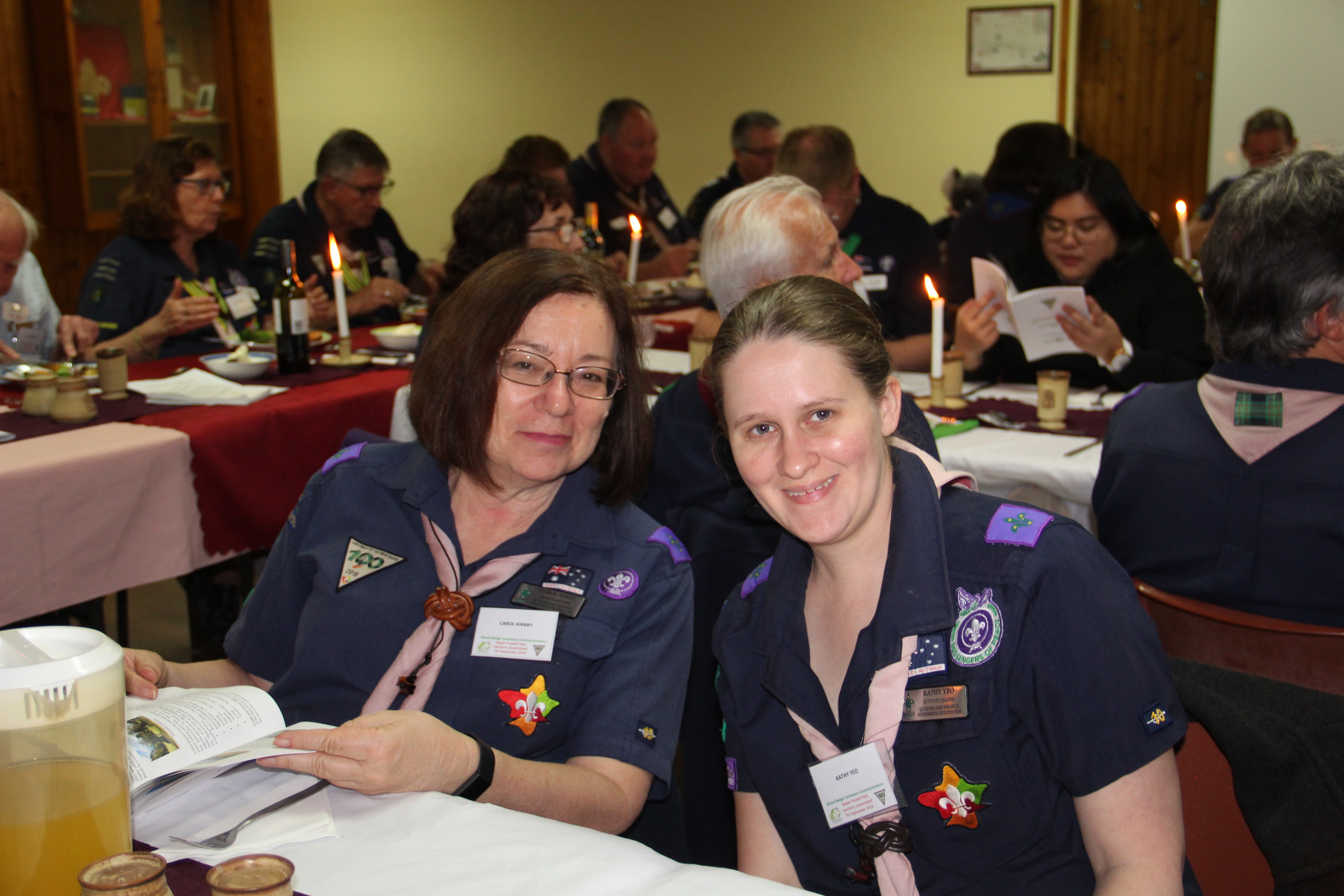 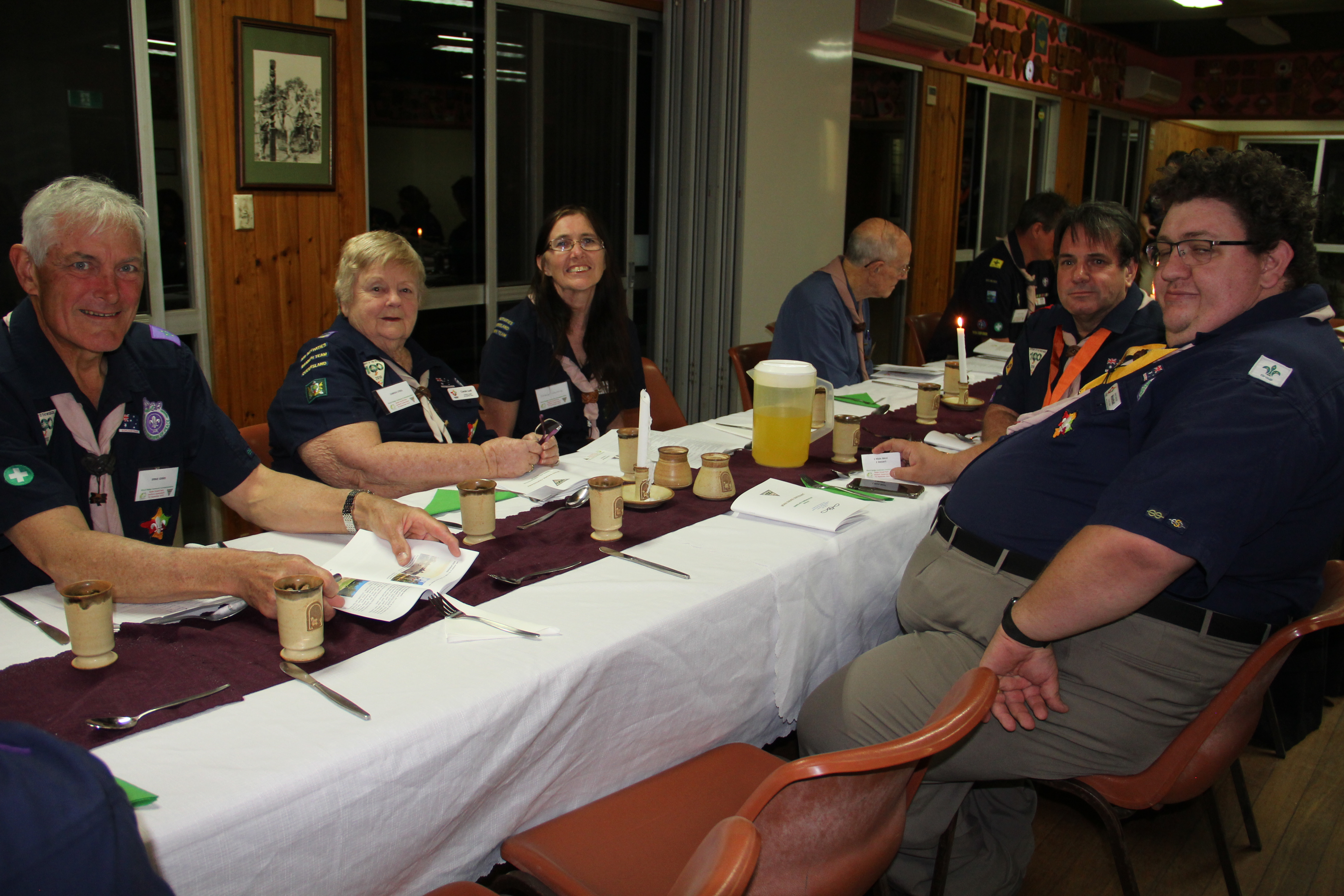 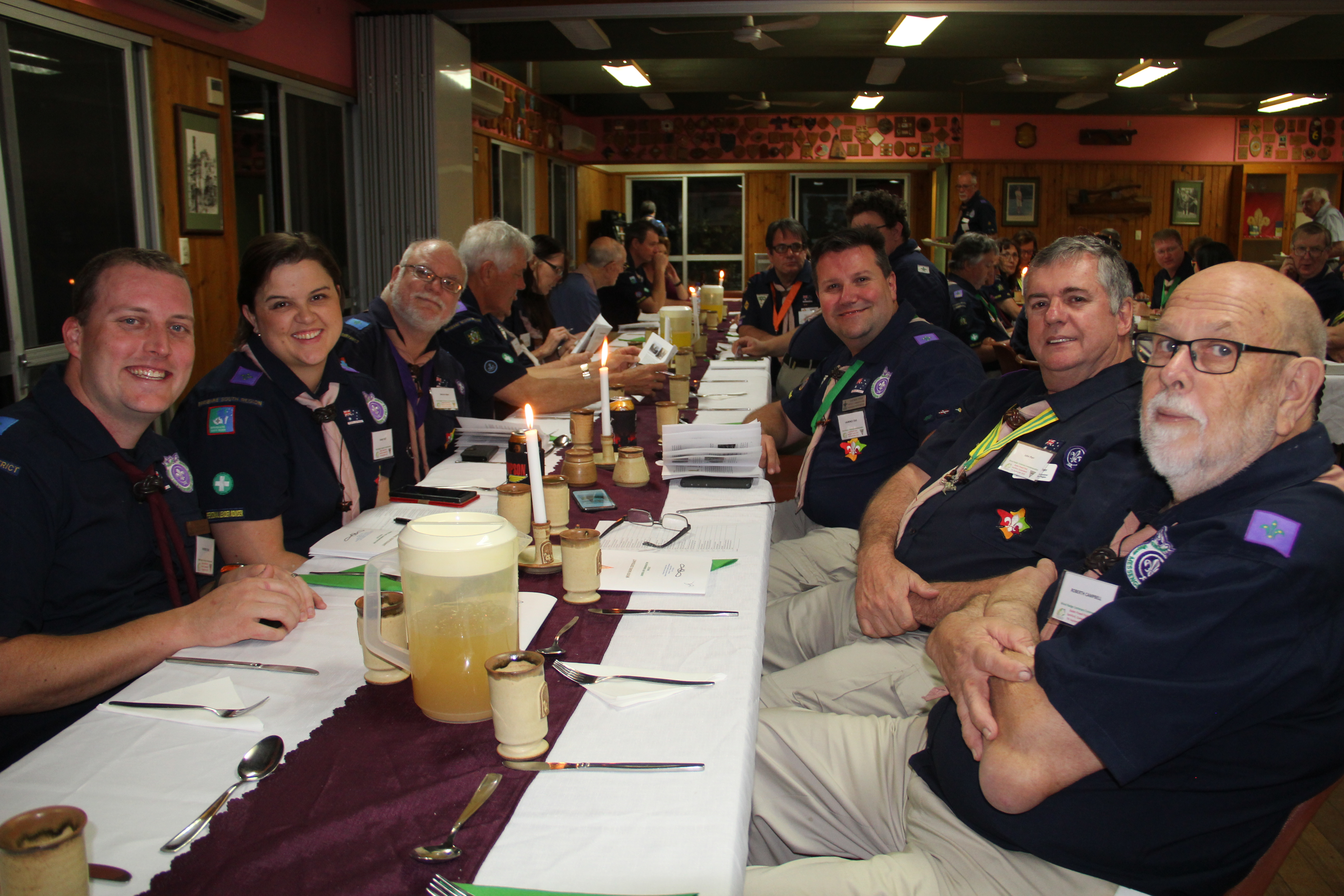 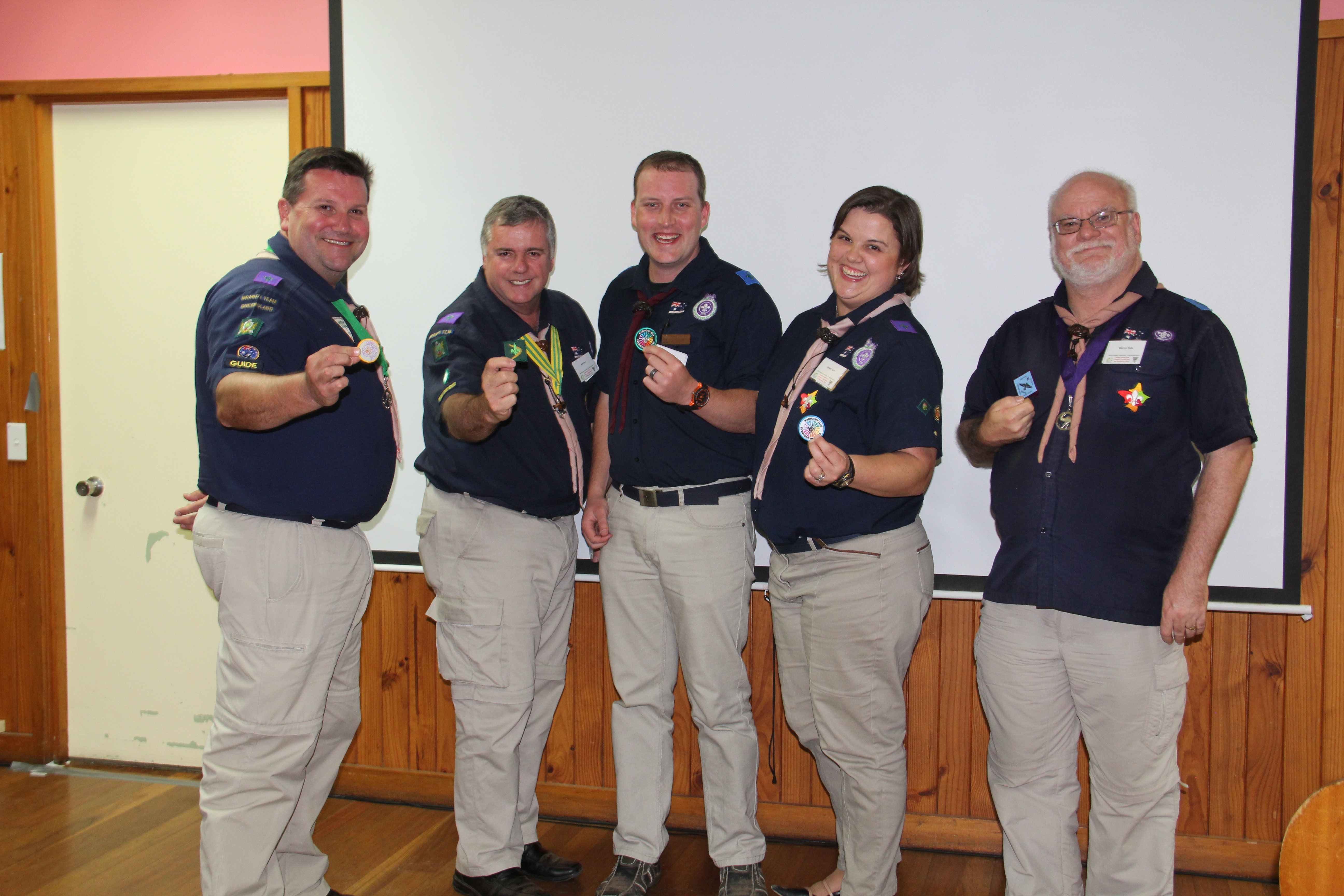 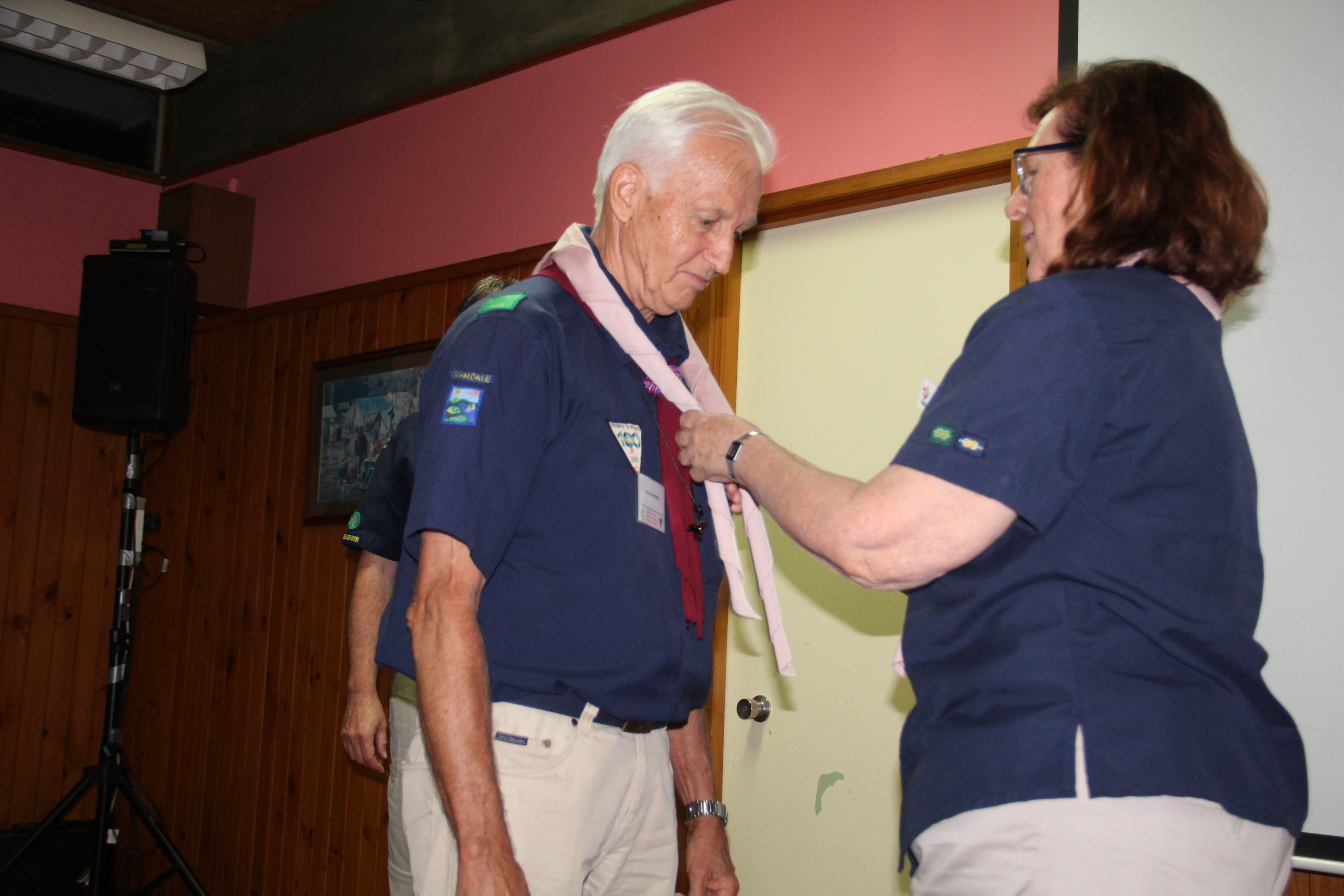 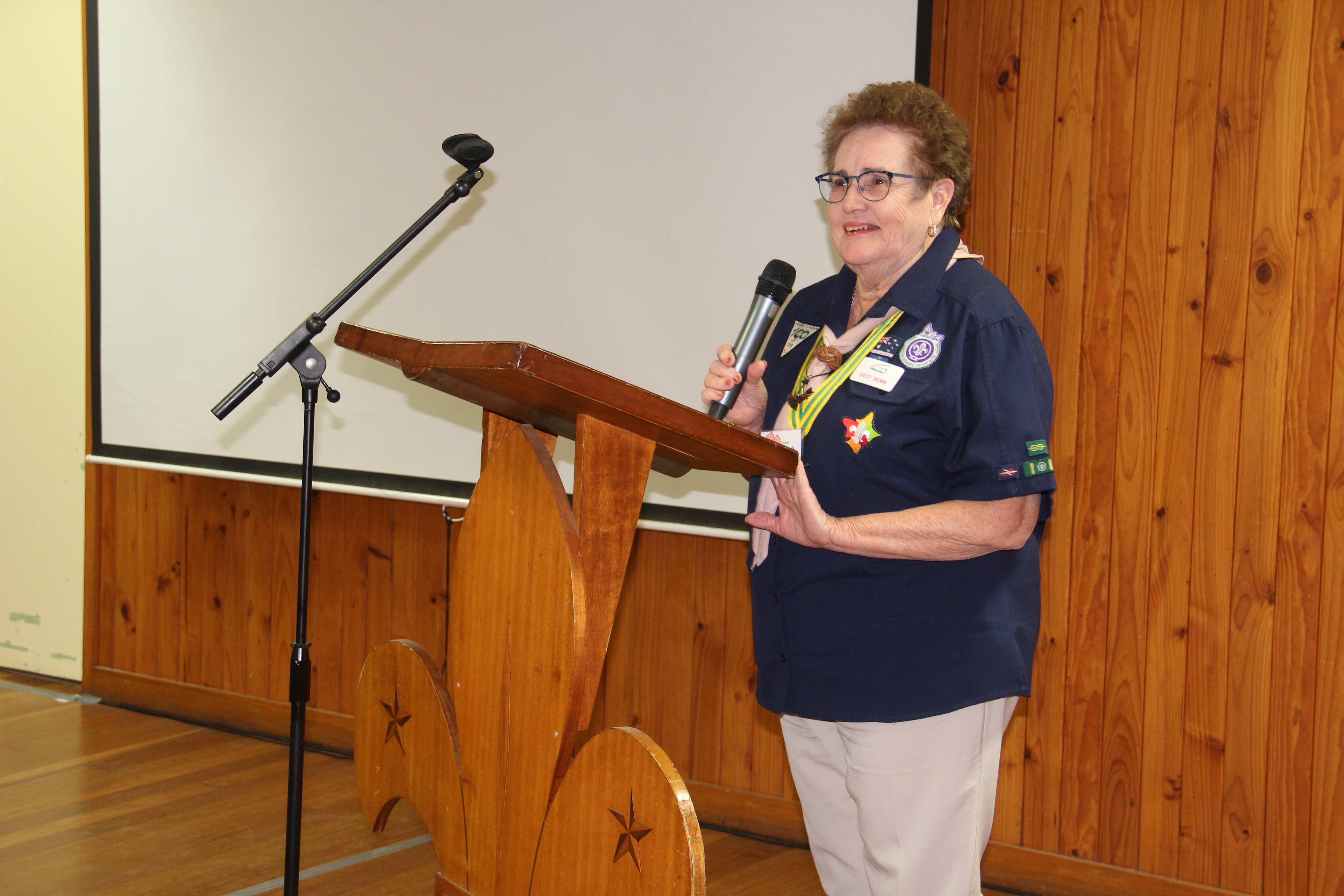 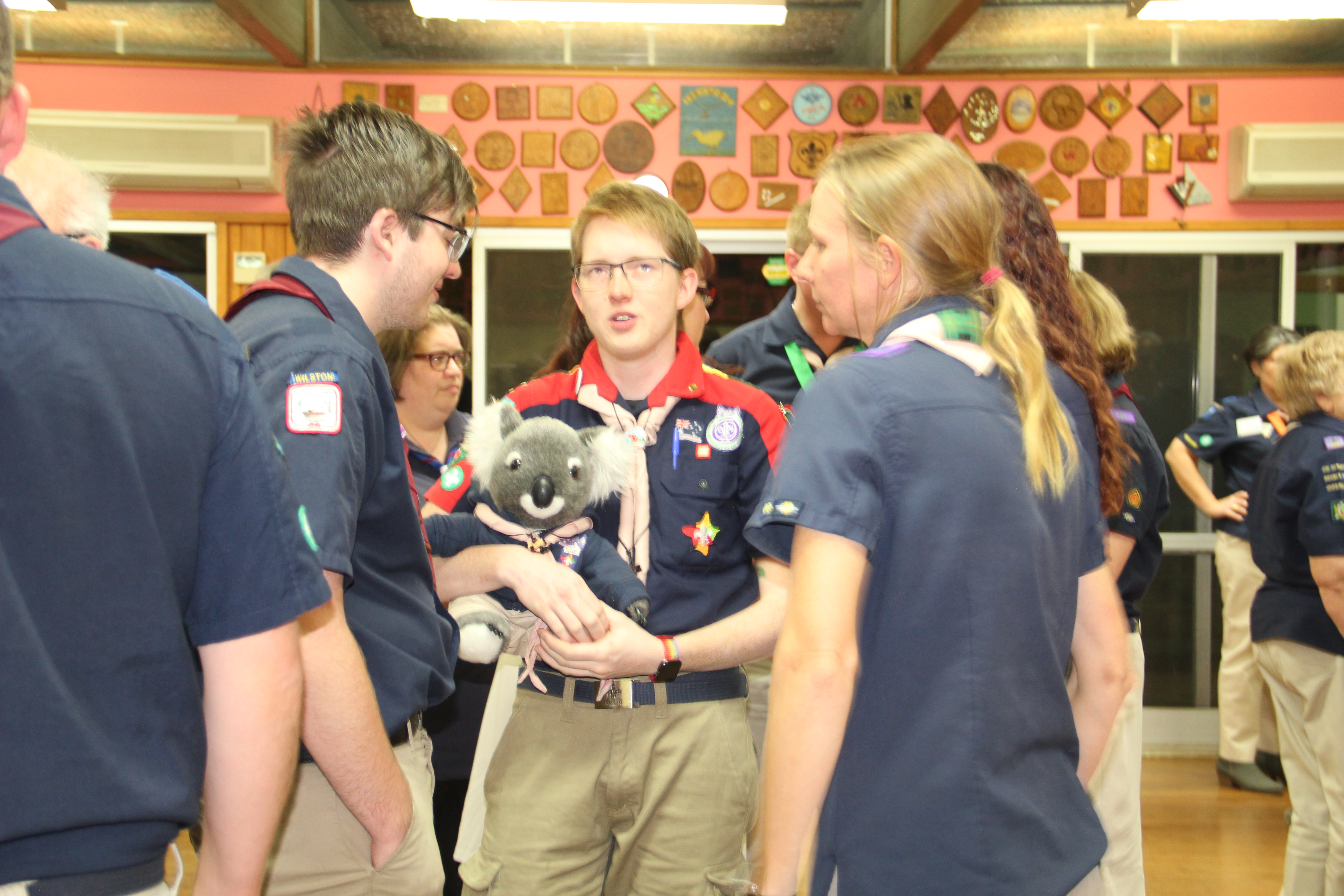