Tales from our Heritage: 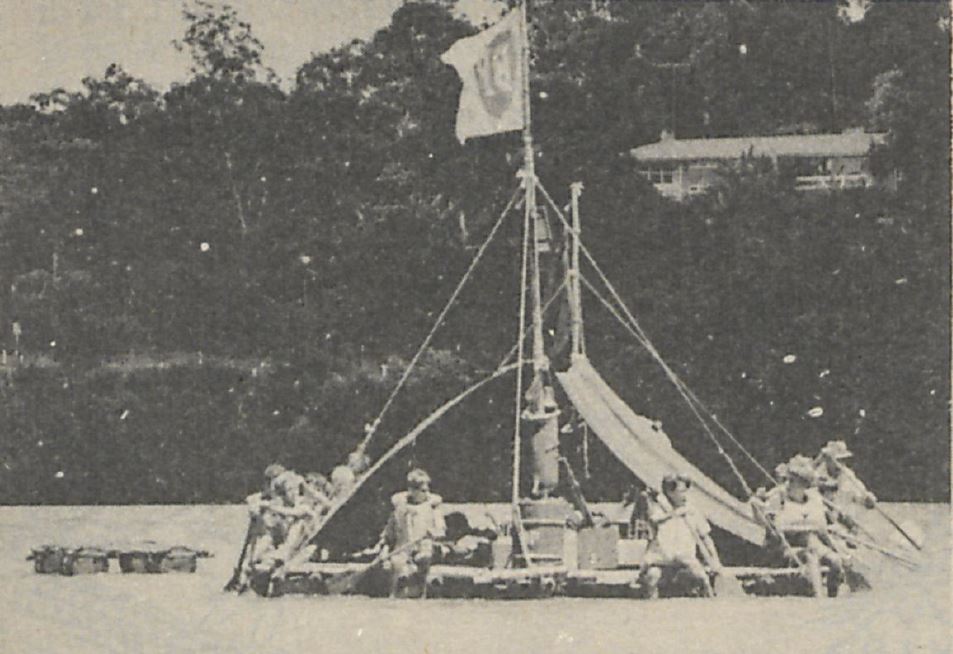 From the pages of our past Scouting magazines comes the inspiring story of this exciting and challenging adventure in January 1970. In planning the activity, it was decided that no age restrictions would apply so 11-year-old Scouts would have the same opportunity to take part as the 14-year-olds. The only pre-requisite was a fairly high swimming proficiency with Swimmers’ Badge – 100 yards fully clothed and 10 minutes treading water or floating. With the initial 9 Scouts from the Corinda Troop signed up, another 4 from other Troops were enlisted to make up the 13 crew members on the raft. 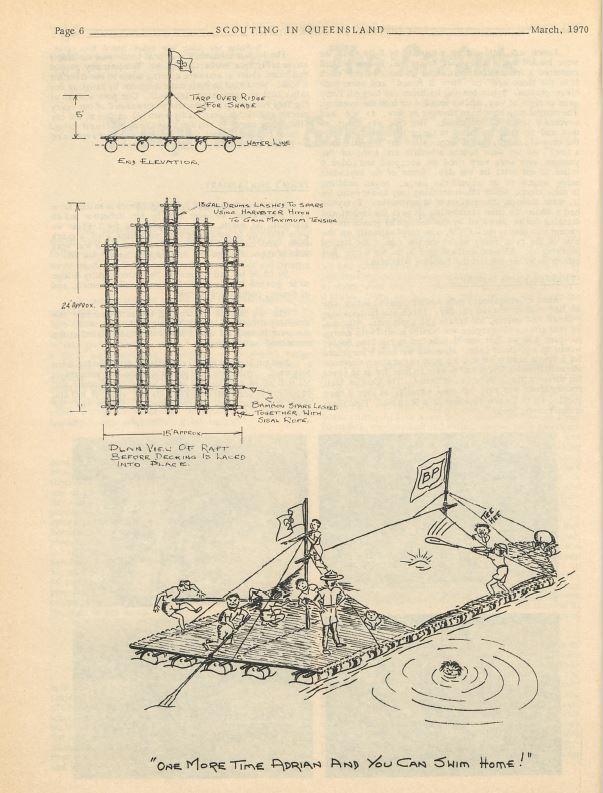 To construct the raft, a plan was drawn up and materials obtained – 44 thirteen-gallon (210 lt) drums were provided by B.P. Australia Ltd, 300 metres of bamboo lengths was obtained and cut from the grounds of Corinda High School, and 800 metres of lashing. After a practice build at the Den over a weekend, this equipment was taken to Colleges Crossing, Mt Crosby, where construction of the raft, named the ‘BP Endeavour’, began on Monday.

By 3 o’clock the main framework was lifted into the water and the decking, the masts, flags and tarps were added – all was now ready for the voyage. On Tuesday morning all sorts of people arrived to bid farewell and at 7.20am, the fully loaded raft drawing about 25cm, cast off and drifted majestically away from the bank accompanied by much shouting and whirr and click of cameras.

During Tuesday, Wednesday and Thursday, the raft with its crew was paddled down the Brisbane River with many incidents and experiences along the way.  These included the current between two islands upstream from the Bremer junction pushing the raft at an alarming rate into the bank; a confrontation with about 50 cows who objected to the Scouts using their favourite shade tree; being given the nautical right-of-way by the Moggill Ferry; and being given a tow by a gravel barge.

On Friday morning, a short 45 minute run took the raft and crew to the Lone Pine Jetty, and by 10.30am they had arrived at the Indooroopilly Bridge to be greeted by a battery of cameras and newsmen, and of course, parents and friends. The sad task of dismantling the raft took half the assembly time, and after returning all the gear to the Den all participants went home, tired, but nevertheless elated at the success of their adventure.

It is now part of history, over but far from forgotten. With films and photos to assist their memories in the years to come, a week of fun and friendship in true Scouting on the raft ‘BP Endeavour’. The Adventure in Scouting continues today.