Tales From Our Heritage: 1974 Queensland Floods

During the 1974 Queensland floods before there was today’s Mud Army, there was “Operation Good Turn”; Scouts helping in the big clean up.  The article below from the March 1974 edition of the “Scouting in Queensland” magazine reported on the work of Scouts during “Operation Clean Up”. 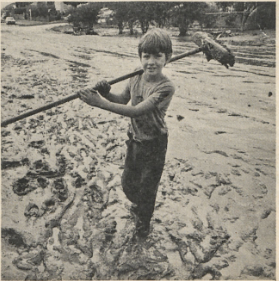 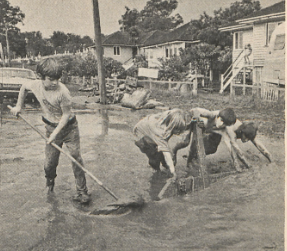 The hectic rise and heart-breaking aftermath of the most disastrous flooding that the cities of Ipswich, Brisbane, Beenleigh and Gold Coast had experienced for a century gave members of the Scout Movement adequate opportunity to carry out that part of the Promise – “to help other people”

On the Friday, Saturday, Sunday, Monday of the Australia Day weekend a large number of Leaders, Venturers, Rovers and Scouts were involved in Civil Defence operations such as rescue, welfare and communications in all the flooded areas.

Many Scout dens were opened to take in flood victims and supplied accommodation and hot meals.  Other dens in unflooded areas set up collection centres for food, clothing etc and most of these handled many tons of these commodities whilst in operation.

On the Tuesday following the Australia Day weekend, Chief Commissioner Tom Roberts was busy organising Branch Headquarters and Districts in South East Queensland to turn out on a massive scale to assist in the clean-up of flooded areas.  This campaign nominated “Operation Good Turn” was publicized via Radio and Newspapers to inform people that it was available.  Part of “Operation Good Turn” was the organisation of work parties from Dulendella and Sir Leslie Wilson Districts under leadership of Field Commissioner Les Carr to clean up damage caused by flash flooding in the creek that flows through Baden-Powell Park.

On Wednesday morning a meeting of the combined Service Clubs was held at Radio 4lP to coordinate clean-up efforts.  As a result  of this meeting “Operation Good Turn” became part of the massive “Operation Clean Up” which involved: Jaycees, Lions, Apex Clubs, Radio 4IP, the Scout Association and the Army.

In a short number of hours an operation H.Q. was set up at 4lP’s Studios manned by the Service Clubs.  Calls for assistance and offers of help came into the centre on the twenty telephone lines and these were coordinated and passed on by the Army Personnel radio network to l4 Command Centres in the flooded areas.  These Command Centres were staffed by members of service Clubs, and the Scout Association was responsible for the Centres at Morningside, Auchenflower and in conjunction with the Lions Club, West End.

The need  for the centre at Morningside ceased on the Thursday so all our attention was given to West End and Auchenflower.  D/C Paul Rosser and A/A/C Ron Wallace did excellent work in keeping the Auchenflower Centre open and A/B/C Rex Lance and D/C Norm Williams the same at West End.

In addition to these Centres, members of Moreton Area, Tyakunda, Tarcoola, John Oxley, Logan, Dolphin and South Coast Districts were busily engaged in clean-up operations in their own Districts.

At the Centres on the Saturday, apart from the large number of civilian volunteers, Scouts, Cubs, Rovers, Parents, Leaders came from “all points” and were given the back-breaking tasks of shifting sticky, black, smelly mud that covered everything.  They washed floors, walls, furniture, picked up bottles and debris and washed so well that it was obvious that such a large work force would not be needed on Sunday as machines would need to be able to pick up the piled rubbish and people were hindering the work of the machines.

It was estimated at 2,000 Scouting personnel from all over Brisbane were involved and even personnel from Toowoomba and Nambour participated on Saturday.

It is impossible to estimate just how many members of the movement were involved and just how much was accomplished but to express with all sincerity, many thanks to ALL those who responded so well and worked so willingly and so adequately carried out that part of the Promise “to help other people”.