Whilst Que was wandering around BP Park, Samford, she heard lots of voices, footsteps and dragging noises.  It turned out that there was a group of leaders from all sections undertaking a Pioneering course.  They had learnt all sorts of basic knots like the reef knot and clove hitch and also square and diagonal lashings.  Following this, they had lashed the ropes together to form trestles, which were secured to the trees and anchored to the ground.  The aim of the exercise was to eventually construct a rope bridge.  Que wondered if it would look anything like one of the original 3 rope bridges that used to cross the creek next to the Providore. Que found the activity quite interested and ventured to take some photos with them, as they learnt skills in preparation for the new Outdoor Adventure Scheme.  On the way around the park she passed the weekend campsite warden and took a photo with him. 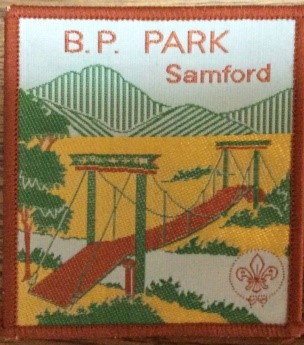